Now several years ago, when Amelia was back in Infant School, part of a school project was to make an animal that was over 1 metre tall. She chose to make a giraffe but due to some of her delayed development and sensory issues, it was me that ended up doing most of the work.


Here is the "story" of our giraffe;
(it was funny looking back at these especially as Jack turns 16 today!)

Amelia called him "Hula Hoop" which were one of her favourite treats at the time and over the years he has been moved around the house and garden. A couple of years ago, after decorating our dining room I felt that I would like to give Hula Hoop a bit of a re-vamp. Now this never happened, and it may never ever happen as there will always be other things that will be put first. lets face it, when I can prioritise decorating a 5ft paper mache giraffe, my life will need to be pretty relaxed.

I did have visions of tidying up a few places, reinforcing here and there, giving him some better eyes and eyelashes, possibly decoupaging him in wacky colours (well wacky colours for a giraffe!) and giving him a pretty beaded mane and tail.............pie in the sky? Maybe but who knows.

Recently old Hula Hoop was moved out into the garden where we have been trying to tidy up and make a little covered seating area. Work is still in progress and I still have a little list of crafty ideas to try. But, here is Hula Hoop in situ on the patio. 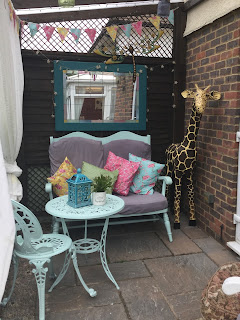 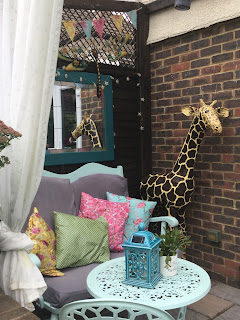 Out of the blue the other day, Amelia was cuddled up on the sofa next to me, she turned and asked "Mummy, are you going to Zentangle Hula Hoop?"

A zentangled Hula-Hoop would be amazing, but I don't envy you the task