A card for Jack!! 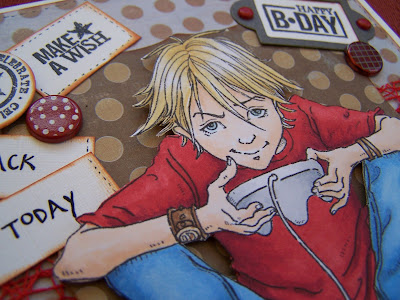 My "baby boy" was 11 yesterday and starts Grammar School on Friday! I cannot believe how quickly the time has gone!

Now I saw this image from Mo Manning aaages ago and knew straight away that I just had to use it for Jack! He is mad about electronic games, computers, gadgets etc and considering I haven't crafted for a few weeks I thoroughly enjoyed making this for him. It is always best making cards for those that are closest for you! 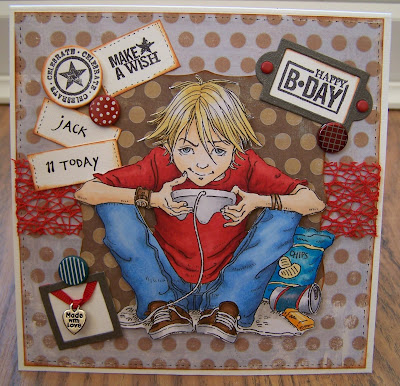 This card was also made for;

I HAVE to make a few more cards this week, so hopefully I won't leave it so long before blogging again! XX
on August 31, 2010 4 comments:

Plastering and patios instead of papercrafts!

Well life is just hectic, but I am rather a glutton for punishment aren't I! I seem to live life going from one "priority" to another and never really managing to complete anything in it's entirity! I suppose life with children is like that for everyone but life with a disabled daughter is just that much more stressful - more to do and less time to achieve it in!

A few weeks ago it was repainting the playhouse, then it was replastering the living room and this weekend it was laying a patio! We got fed up with all the local cats using our slate patio as a huge litter tray. We laid it about 3 years ago as a temporary measure after having the house extended. Cost saving at the time but enough is enough when you cannot even allow the children to go out on the patio!


Well the sand, cement and slabs were delivered last week, the cement mixer arrived on Friday and it seems it the lovely British weather thought it would make life just that much trickier for us to work in- 3 days of now stop labouring and several torrential downpours later we are allowing ourselves a day off - especially as it is Jack's 11th Birthday today!!


First things first we had to move well over a tonne of slate to the top of the garden. Woke up on Friday morning and thought we'd forget the patio and build a swimming pool instead! 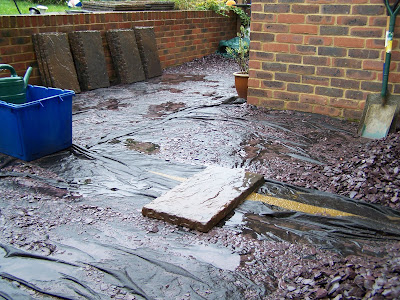 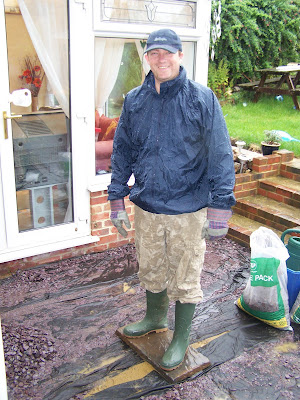 No where near finished but getting there! 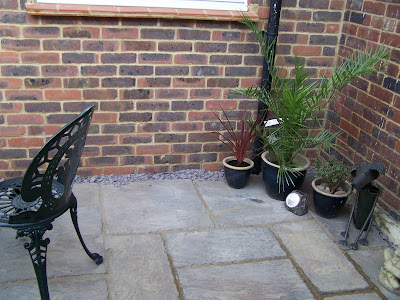 Next job on my gardening agenda is building a little brick wall and redoing the overgrown rockery. I am leaving that to next weekend though!
on August 30, 2010 1 comment:

A Favourite Charmed at Dottie's World! 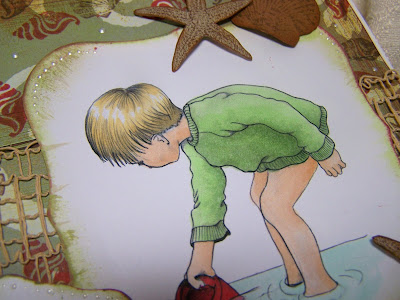 It's Gunn's turn to set the challenge over at Dottie's World this week and she asked us to use a favourite Charmed Download. Simple you'd think but how on earth do I choose just one download! I dithered around over the Pixies as I love them so much but I couldn't chose between several of them so I put those to the back of my little mind and went for something else instead. 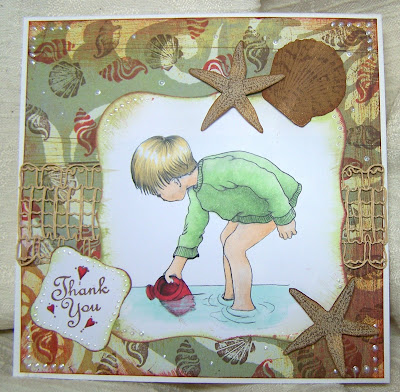 I made a vintage style card with this image a little while ago and enjoyed using it so much I thought I'd try it another. Now I REALLY need to get a bit of craft shopping in as some of my basics are running low; things like inks and adhesives so I tried using a few different inks I had laying around- not sure of the effect I have messily created but hopefully I am able to get away with it!
I also made this card to suit;
Basic Grey Challenge - Pearls - I used Mortifica and Liquid Pearls to supposedly match my seaside theme.
The ABC Challenge - A for August - Well you are meant to be able to paddle in the sea in August aren't you? ( I suppose you could always paddle in the torrential rain!) 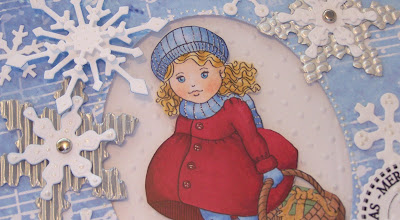 Over on Dottie's World this week Dottie needs to get FRAMED!!!
Details of the FRAME IT challenge along with details of £10 voucher blog candy
ARE HERE!!!!!!!!!!!!!! 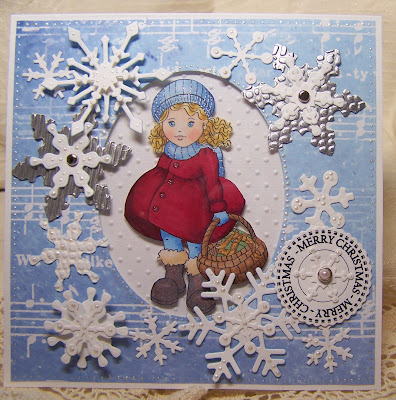 I decided to put the gorgeous Market Day image (from Sugar and Spice collection) behind acetate for a "window" effect and then to frame it with snowflakes. I am not at all sure about the finsihed card and whether it actually "works but I have found it rather difficult to be inspired this week. Especially with my little helper around!LOL

All in all though I cannot complain, we have finished painting the playhouse, the living room ceiling has been plastered, PVA'd and a first coat of paint went on yesterday. Guess what's in store today then...well it's either painting or building that little brick wall...hmm, decisions! 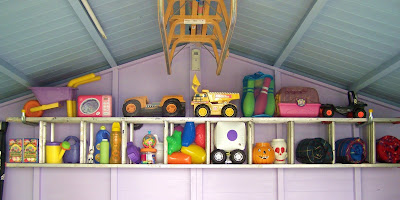 My poor little head is spinning, playhouse still in chaos, living room ceiling half down, Amelia due back this evening and the plasterer due in tomorrow morning.....what I time to have crafty ideas, inspiration and the motivation! LOL
At least the inside of the playhouse is painted, well the basics anyway...I fancy decorating it with silver stars or something. As you can see I used up scraps of old paint for a beach hut, summery feel. I wondered whether the concoction of blue paints we mixed together, the lilac and the lime actually worked but when we started using the large ladder (which really has nowhere else to be stored) as a storage unit for some of the toys, I am now even tempted to bring a bit more orange and yellow into the scheme. 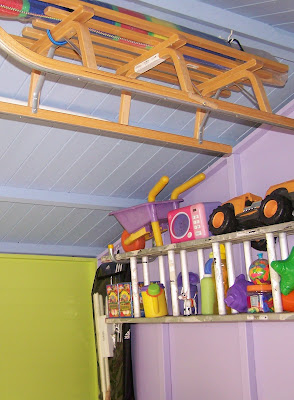 I sorted out a few old, odd buttons and some wire and would like to start a sort of mobile/wind charm to hang from the ceiling- not quite sure how that will work out but hopefully the children will enjoy helping me.

I also had the idea of salvaging an old dartboard from the loft, it never really had a home but thought it might be a fun game with Jack, not too sure I fancy Amelia throwing sharp objects around though!! Now this is crying out to be altered, don't you agree? Another project I'd like both the children to help out with. 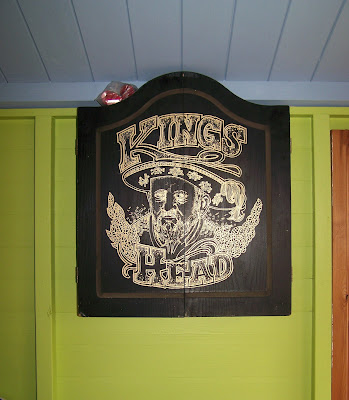 I have popped down to our local hardware shop today and I am attempting to make a pendant out of a washer. I am eagerly waiting for the Glossy Accents to dry and will post a pic and details as soon as I can. Not quite sure of mine at the moment but others I have seen look fabby!

Right off to move a bit of furniture around in the living room and then make up Amelia's bed so she has some where to sleep tonight.

I am just not used to being without Amelia being next to me constantly BUT she is staying with her Nanny & Grandad for a few days and Jack is certainly not the early bird of the family, I am letting him have a little lay in this morning.

Now to update you of the havoc in the Dingle house. On Saturday we had some bricks delivered for me (yes, ME!!!!) to build a little brick wall. I will say it's is only a little, one course of bricks onto the foundation footings that Chris has already done for a rockery border in the garden. Now the thing is, Saturday was rather wet and gloomy so I now have a pile of bricks in the middle of the garage waiting for the next opportune moment to strike.

So our plans for Saturday went slightly astray and I told myself that I would do some gloss painting instead-there's still loads that needs doing in the house but gloss painting with Amelia around is not an easy thing, well not unless you like loads of fingerprints in your paintwork. I have been feeling pretty low this last week, having both the children at home and their abilities and preferences getting further and further apart has really hit me hard and I needed aboost.

What better way of a boost than a bit of creativity, this creativity took the form of attacking the "playhouse." Now we got the playhouse 5 years ago with the intention of making it exactly that, a summerhouse that the children could play in but when we had the house extension a few years ago, the contents from the old garage got stored in there and it became more of a really messy shed. See what I mean!!! (BLUSH) 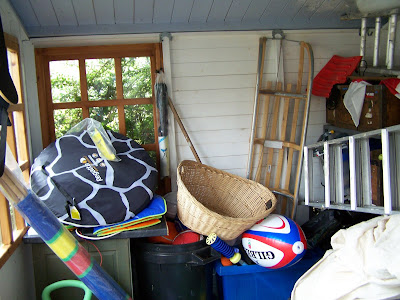 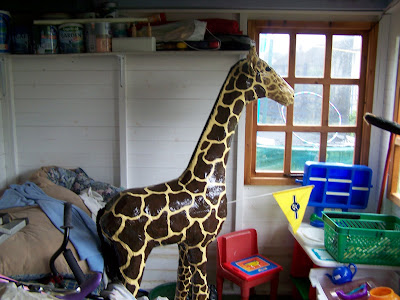 Now please don't expect to see some fabby, designer creation. I made the best out of a few weird and whacky colour combinations and used up some old, half empty pots of paint in an attempt to save money and make a bit more space too! I hope to get back out there today and finish off the painting. I have a few more crafty ideas for this little playden, our suite is being replaced soon but the two seater sofa is in reall good condition still so it's going to have a new home in the playhouse, posible covered with a patchwork throw and a match homemade rag rug on the floor...am I too optimistic...yeah, I guess it may never happen but the though was there.

It doesn't help by the fact that yesterday as I wandered through the little crafting section at Dunelm Mills, I came across a SEWING BOOK that I couldn't resist!

Now my poor sewing maching has not been used properly for years, it's dusted off for the occasion stitched card but that's about it! Hmmm, now I am in another quandary
...what do I do first!
on August 02, 2010 2 comments: 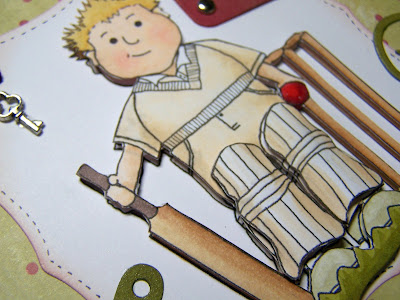 Well, manly with a twist - it's my turn to set the challenge over at Dottie's World this week.

Whilst looking through my stock box I noticed I am incredibly short of cards for men so I thought it would be a good idea to get a few in there rather than keep putting myself under the pressure of having to make them at the last minute - cards for men can be tricky enough as it is!

You have loads of images to choose from the Charmed Download collections so lets see what you can come up with........Now for a little twist, I want to see some ribbon on your manly cards!! 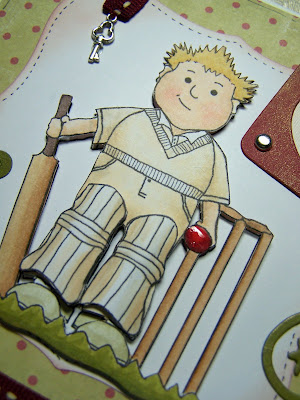 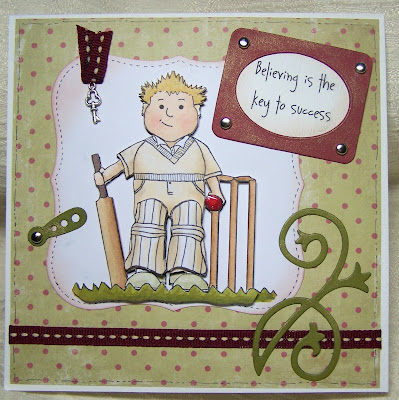 I also made this along with the challenge for;