Dottie at the Movies! 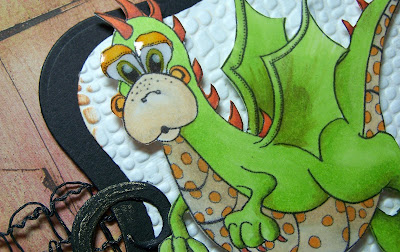 What a week it has been, the end of term for Amelia on Wednesday, all the end of term parties and a Fun Day at work, saying goodbye to 17 of our 4 year olds off to school in September. THEN to top it all Jack had his last day of Primary School on Friday. He is really grumpy and unsettled at the moment- not surprising really as he is one of only two boys in his school off to Grammar School in September. Hopefully a bit of time and reassurance will improve matters!

I am having awful issues with Amelia, her sleeping and eating are quite poor at the moment as she is complaining her "neck hurts." We are off to see the ENT consultant next month regarding her hearing and I am wondering if there is an issue with her tonsils and adenoids too.

I feel shattered already and have six weeks of constant attention with Amelia to cope with. Hey Ho......

Anyway onto the very little bit of crafting I have managed.

This week over on Dottie's World the challenge is Let's Go to the Movies!

NOw I only started this last night and I was so tired it was just one disaster after another and I am not at all happy with the card....not sure the sentiment works but I will follow up with some apt words inside the card and hope hubby doesn't take offence.

Loved colouring in the Dragon from Once Upon A Time Collection - I should imaging he will be used over and over again! 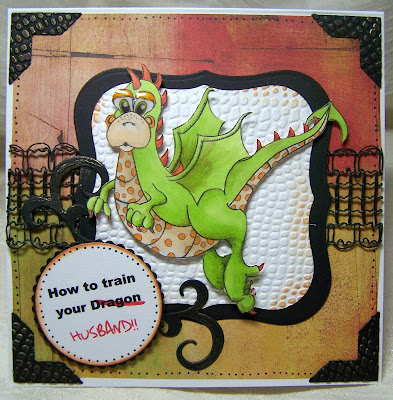 Right best get on now....I have had a few blogging issues to and had to change my background...not sure about this one yet but at least you can read my waffle. 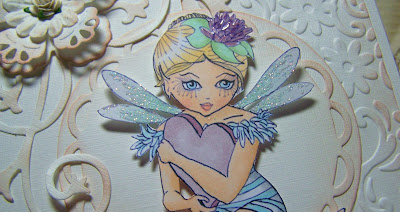 Hi everyone- it's a fabby challenge over at Dottie's World this week and a super prize up for grabs too so make sure you pop over and join in the fun!
The challenge is to make a summery project using a Charmed Download! BUT Lou would like you to make your summer item different to what you normally make!
Look HERE for details!!!!!!!
Now I was really stuck for time yesterday- had such a busy day planned and very little time to make anything so I cheated a bit- hope it's OK. The design is very similar to what I normally make but I saw a challenge on another site and it reminded my of a few cards I had made in the past and really enjoyed - so I went long with no patterned papers and lots of WHITE! I hope this is DIFFERENT enough! I really enjoyed making this card too! Thanks for the challenge Lou!

Here are a few of the cards I had previously made like this, using lots of white and no patterned papers: 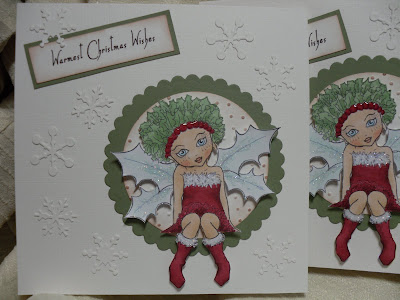 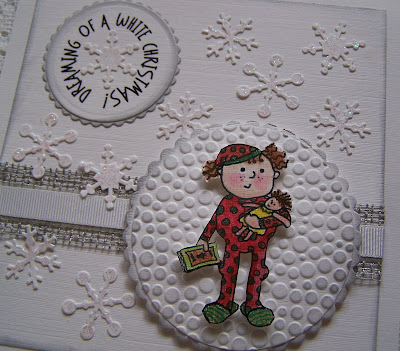 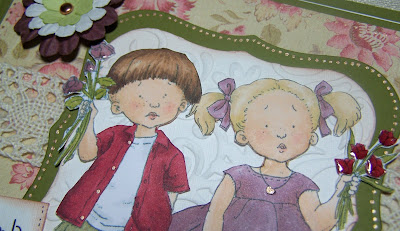 One of the ladies I work at the Pre-school with is retiring next week so I have been trying to gather up little pictures from all the children to put into a little book I am making up. The going is rather slow but at long last it is starting to take shape and I have loads of little piece of art all stuck into the pages now.
This afternoon, I have completed the front cover. 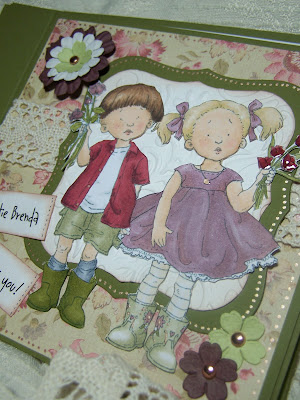 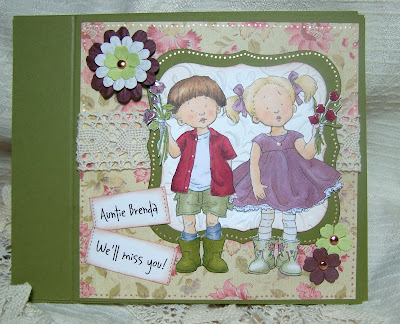 Sorry, the lighting isn't great!
I have been inspired by the current ABC Challenge, Papertake Weekly Challenge- In the garden and Cute card Thursday- School Out!
The wonderful images are by Mo Manning so I thought I'd also enter my Rose garden, flowery card into this week's summer theme challenge!
on July 14, 2010 7 comments: 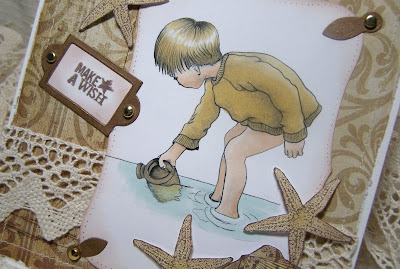 Hi everyone, another hectic and very hot week here! We have had Amelia's parent's evening and an Induction Evening at Jack's new school to slot into our already busy agenda and I am relieved that the week is over. Hopefully things shoud start to calm down a bit now. Yesterday Amelia also had her last Speech and Language session for the term, so that will free up some of our Saturday mornings too! I think the children are growing up far too quickly, especially Jack and I want to try to make the most of the Summer holiday and have some quality time with them both! HOW exactly is a different matter!LOL


Anyway, I am trying to get myself a bit organised and start working ahead again- it hasn't happened quite yet but today's card was actually planned, printed and coloured a few weeks ago!
This week over at Dottie's World we are going VINTAGE!

"This time I would love to see Vintage style on your cards and be inspired by summer. It could be the colours, flowers, time of year...and so on...as long as you include a Charmed Download! 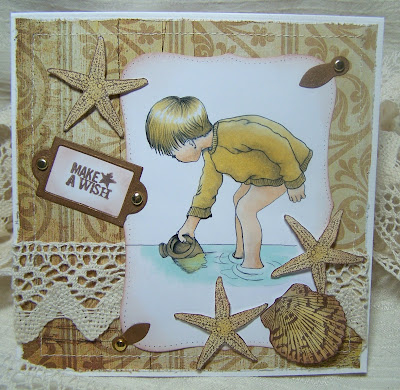 AND don't forget we have another fab new collection to play with too......

Just thought I'd pop in and say hello to any passers by. It has been a hectic week with work, an Audiology appointment for Amelia, loads of school events going on with the children and a HUGE amount of record keeping to get up to date for tomorrow. I just haven't really stopped!
The coming week won't be much better I fear, we have Parent's Evening for Amelia, I have to get Jack to his new school on Thursday and pick him up, therefore I need to make additional arrangements for someone to be here when Amelia gets home from school. Then Thursday evening we are at Jacks new school.
I am back to putting drops in Amelia's ears on a daily basis in preparation for an ENT appointment next month-unfortunately, this week's appointment resulted in another audiologist, another opinion so we are not quite sure where we stand re; a hearing aid for her. Hey, ho...with all her sensory issues, putting in ear drops can be quite a traumatic event, LOL, for her and ME!
Anyway, thought I'd show you a few pics of the chaos in the Dingle house yesterday. It started at 5.30 when Amelia decided it was time to wake up and wreck the bathroom, then it was time to get everyone ready in time for an electrician to sort out a few of our lights. Jack got a new chrome spotlight for his room, we got a new light for the living room, and I have got no working light at all in my craft room- Chris has PROMISED he will renew that today for me. It's in writing now Chris-no going back!!!
It was such a glorious day I decided to take my record keeping out in the garden. I kept Amelia occupied for a while but had to keep on getting up and down to refresh her water!!!!! 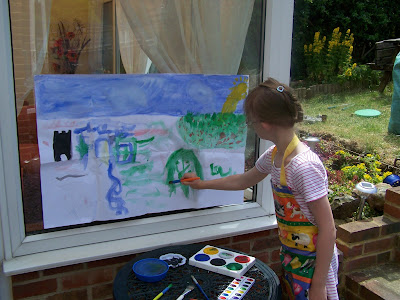 and what started by me having a quick break from the paperwork to do "a bit of weeding" resulted in this!!!!!!! 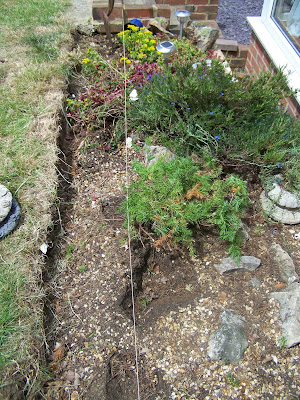 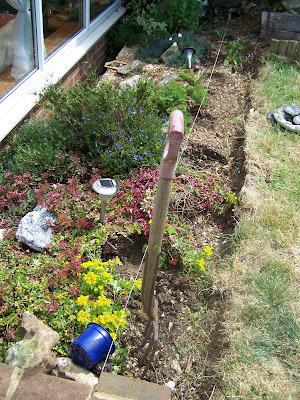 Hhmmm, well the makeshift slate patio that we put down a few years ago after the extension has, hopefully, had it's day. Fed up of the cats using it as a litter tray and we want to be one step closer to a nice, clean, york stone patio. We had always planned to re-use the slate in the borders......so now we need to one by one move and prepare the borders! EEEK! We decided to practically uproot everything and start another rocky area from scratch. It's going to take forever we have to go backwards before we move forwards!

At gone 10pm last night, I decided enough was enough and put away my record keeping for the day. We opened a nice bottle of wine and sat out in the garden for an hour or so. 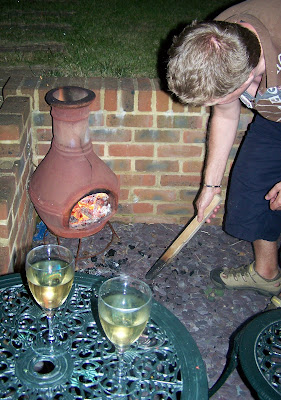 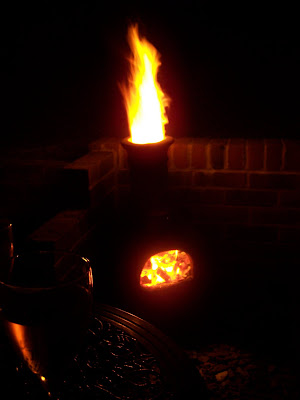 Right waffle over, Chris has gone swimming with Jack and I need to prepare for another day of chaos and record keeping....bring it on!!!!!
on July 04, 2010 3 comments: