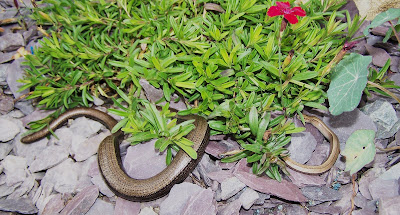 Breaking news when I came home from my last day of work this term! Wandered around the garden in an attmept to clear a pounding head and what did I see...a baby slow worm with Jimmy! Not sure if Jimmy should be Jenny! LOL

Feeling shattered I am going to sooth my head with a large curry, a bottle of wine, and a looooong soak in the tub. Followed by 6 weeks of pure relaxation and pampering. Could someone please tell that to Jack and Amelia!
on July 20, 2011 No comments: Life is as hectic as ever but my work records are done, reports complete and are being handed out to the parents today! Yippee, another thing I can cross off of my ever growing "To Do List!"

Jack has his Year 8 timetable and started the lessons this week. It's scarey to think that this he has been at Grammar School for nearly a year and that this time next year he will have chosen all his exam options. Goodness, he is still only 11. EEk, how old does that make me feel!

Life is still all over the place with Amelia, you just get over one hurdle and another is throw in your face. I just keep on jumping the hurdles as best I can.

Chris and myself have been very busy in the garden. I should be like some sort of muscle woman after carrying all those railway sleepers, concrete posts, gravel boards and fence panels about. Progress is slow but hopefully you can see that there has been some improvement in the chaos we call a "garden!"

So far we re-done the rockery in front of the conservatory, taken the borders right back and made a raised, slate border on one side. Dug up all the plants in front of the playhouse to make a step/ small seating area and fenced the back of the garden and planted out a new border.

"Phase II" of the fencing has been delivered and is waiting in the garden for us to find the time, energy and motivation. WE are attempting to clear the ivy and tidy a very overgrown contorted hazel in preparation.

The garden is looking rather bare but that will take time and I will enjoy watching the garden become established as I sit a sip a glass or two of wine!

Our new little seating area just waiting to be "prettied up" with more flowers
and some solar lights. 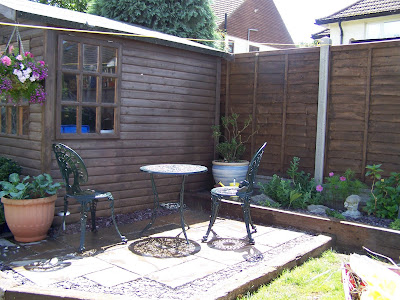 New fencing & border at the back of garden...looking a bit bare! 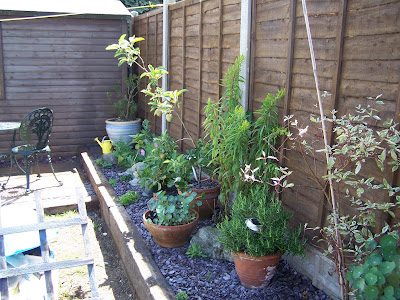 Our pile of rubbish and rubble! .....and at the top of the page, did you meet Jimmy the Slow Worm? He has ignored the chaos and has taken up residency under a rock in the rockery, right outside our conservatory windows. Last night Jack and me were watching the slow worm slowly slithering over the slate and Jack suggested that we should name him. Jack then decided to call him Jimmy (I don't know why) and he called out to Amelia. "Amelia, the slow worm's name is Jimmy!" Amelia replied "Really, how do you know!" LOL