Slowly, slowly...bit by bit I am getting there. Where exactly I do not know!!LOL

What with work and school meetings this week, I had today, my only "free day" earmarked to play catch up on some housework and crafting. And what happens, Jack sat there last night after dinner and told me it was his class assembly today and that he had one of the main parts-narrator!!!! EEK, not being one to let him down, I went to school this morning with the intention of staying to watch. Half way up the path I noticed that all the other children in Infants are not wearing school uniform...double EEK!! I had missed a letter in Amelia's bag (very easily done as if she gets them before I do they get written on, drawn on or rolled up as little treasure maps!! )
I needed to provide a contribution of food towards a raffle hamper and in return Amelia could wear her own clothes.

Dropped children into school, rang Junior office to see what time assembly was, rushed back home, grabbed some pringles and a jelly (!!!) out of Old Mother Hubbard's Cupboard, stuffed some clothes into a bag, a slurp of tea....and a mad rush back to the infants to drop of the clothes, followed by a dash to the juniors to watch Jack in his assembly. Phew......it wasn't even 10am and I was shattered.

Jack did beautifully in his assembly- one very proud mummy!

After that it was back home to "catch up" but when, oh when, does that ever happen. I chatted to a friend for a while about the awful meeting yesterday and where I go next. Then I had several phone calls to make about education, therapy...health...etc. By the time that was over I still have one very messy house and just one little card completed and off my to do list. 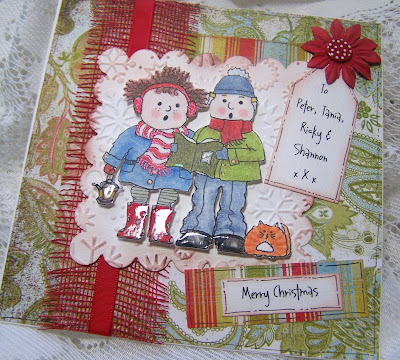 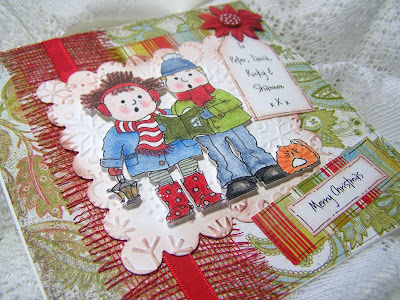 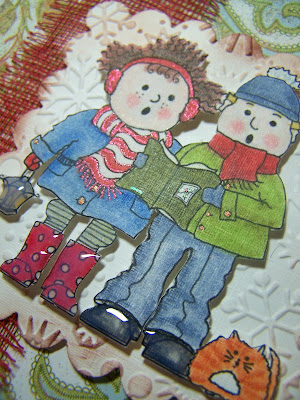 I started it last night ready to post on Dottie's World this morning, but it was still half done when the time came to post it!

Triple EEK...will finish post and upload other pics later as I have just seen the time. Off to do school run......LOL....I wonder why I am not rake thin sometimes!

Right back home again, just had a photographer around, I've got a short while for a quick cuppa before I do dinner and get Jack to his school disco!!
As I was saying earlier before being so rudly interrupted by the clock...the above card was made to show on Dottie's World using a Christmas Download image.
I used the sketch on this week's Sketch Saturday.
Right, deep breath, that cuppa is calling!
on December 05, 2008

I don't know where you find time to craft. You do better than me!!

Phew I'm worn out just reading this. You've been a bit busy today to say the least. Fab card and I love the Dottie & George image.
Michele x

Whoa, slow down you are exhausting me and I'm only reading what you've been up to. Glad it worked out in teh end though! Card is gorgeous, I especailly like the reds they really seem to pop and the glossy accents onthe lamp and wellies is fab too. xx

I'm so sorry to hear that you've had such a frantic time the last couple of days Adele, but let me just say, your cards are still fabulous so no change there then!

Whoa sounds like you have had a hectic few days and you have still found the time to make this beautful card. Thanks for joing us this week at Sketch Saturday. Debbie x