Well it's not exactly a fair contest is it! LOL

I have been rather absent from crafting, instead I have been painting the inside of the Playhouse/Summer House, sewing linings into curtains, tidying up and decluttering (or at least trying to!) applying window film to the conservatory windows....you name it, it's probably been on my to do list for several years!

This morning I rather unsuccessfully dyed the last batch of loose sofa covers to put on the sofas in the Summer House. They aren't the look I was going for but at least the faded areas aren't so extreme and they are all fresh and clean. I then dismantled the grids on the extractor fan and cleaned them all up and then started tackling the grill section of the range cooker...that was enough. What better excuse did I need to relax for a while than the launch of the latest Kit and Clowder Marker Class!!!! Oh my, what a gorgeous image to work with than the Molly Harrison's Fairy on Moon.

I just could not resist and downloaded the class and printed it out straight away! Loads of freebies and incentives on the Kit and Clowder Facebook page but to be honest, I didn't need much in the way of encouragement!

Just completed Chapter 1 - The Moon!
What a fun technique using the colourless blender Copic marker! I am a bit unsure about the white expanse in the highlighted area of the moon but hopefully once the rest of the image is complete it will all come together! 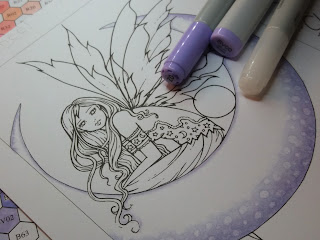 NOW! Do I attack some paperwork, clean a window, weed a bit more of the drive......
or move on to Chapter 2?

Email ThisBlogThis!Share to TwitterShare to FacebookShare to Pinterest
Labels: Copics, Kit and Clowder

Looking forward to seeing how the colouring comes on, hope you will let us see each step as it progresses. If I started I would have to work through as many stages as possible but I know there are not enough hours in the day to do crafting and the jobs around the house!

Love following your colouring progress - this is looking gorgeous so far!

I hope you chose the 'right' option, Adele ;)