A sneak peek at "The THING!" 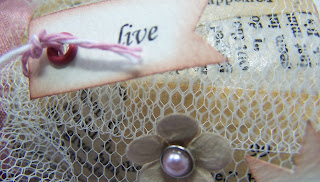 I have put my name down to set a Time to Create challenge over on Crafts by Carolyns later on in the year. I had an idea of what I was going to do straight away as I had "something" lurking in a dusty box on the top of a cupboard in my craftroom that I wanted to use as inspiration!

I have been working on "the thing" on and off since last weekend and have really enjoyed it, until yesterday I sliced my thumb on my scissors. My awkward attempt at crafting since then hasn't been so enjoyable.

I cannot share anymore with you until nearer the time but until then, why don't you pop over to Carolyn's and join in with the current challenges!
on April 27, 2012