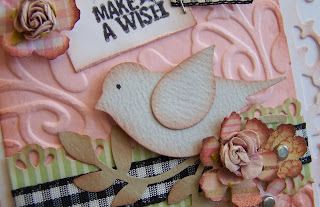 I am feeling rather sorry for myself, I have been ill for a week now and this rotten head cold shows no sign of shifting. I had been really starting to get into my new "healthier" fitness routine too by starting Couch to 5K. I think I may as well start all over again, hopefully in a few days time when, fingers crossed, I feel better.

Had a "day off" today so I have made a few phone calls, done some paperwork, and spent some time this afternoon with crafting. I haven't actually achieved much, punched out, inked and glued several little birdies, and started making up some toppers. My plan was to make small batches of the same design, just using different variations of colours, ribbons, etc....but so far I have only completed the one little lonesome card!

Still, one more than I had before! I used the same design as that I put on my last exploding box. 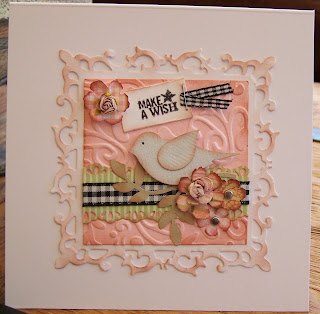 This card meets the criteria over at;
Sister Act - #7 Anything goes
Crafting for all Seasons - Think Pink
Card Makin Mamas - Punches
ABC - Not just one

Hope to get my creativity going again soon but the day is running out, got parent's evening tonight!

Email ThisBlogThis!Share to TwitterShare to FacebookShare to Pinterest
Labels: Stampin Up

Hope parents evening goes well and that you begin to feel better. Glad you've had some time to craft - this is such a gorgeous card x

This is simply gorgeous! Absolutely love it xx

Oh my goodness....this is sooo beautiful! I'm in awe of your creation! I'm so glad you joined us at Sister Act this week! Your work is brilliant!
Hugs~
Trisha